This is my original in-depth article on this subject. Here is my more concise overview of the Uranus-Pluto square, including personal strategies for working with it.

Astrologically, we are in the midst of a profoundly turbulent and exciting time. From a cosmic perspective, all the breakdown, revolution, and crisis now in process are absolutely essential. They are necessary harbingers of the new Golden Age of harmony and universal love now arising.

We inhabit an unsettled world. A world of economic uncertainty, more frequent and powerful natural disasters, and increasing evidence of global warming.

It wasn’t that long ago that Japan experienced a tsunami and a triple nuclear meltdown. The Arab Spring revolutions are still playing themselves out, especially in Syria. The Euro Zone continues to struggle with a massive debt crisis. The global Occupy movements highlighted the widening economic disparity between the “1%” and the “99%.” And American politics has become intractably divisive.

As we examine the astrological influences underlying these events, remember that any particular planetary alignment has many possible outcomes. By consciously partnering with the planets, we can create a new reality which serves the highest good of all.

The top Western astrological headline of the 2010s is, without question, the Uranus-Pluto square. This 90° angle between these two powerhouses has been working its juju since the global financial crisis of 2008. As with horseshoes and hand grenades, “close enough” definitely counts in astrology!

To understand how these two planets work together, let’s first examine them individually.

Uranus catalyzes paradigm shift, rebellion, shock and awakening, and can strike like lightning. On an individual level, Uranus represents the humanitarian, the revolutionary, the genius, and the individualist. It zaps down intuitive flashes: those ideas we absolutely know to be true upon inception, and which we are always wise to follow!

Uranus entered Aries in 2010, and will remain there until 2018. This placement correlates with new beginnings, and stimulates innovation, technology and revolution.

Uranus’ prior entry into Aries, 1927-28, was marked by several technological breakthroughs. The Jazz Singer , the first talking motion picture, was released. These years also saw the first successful TV transmission and the first color movies. Uranus’ association with aviation was highlighted by Charles Lindbergh’s historic transatlantic flight to Paris. 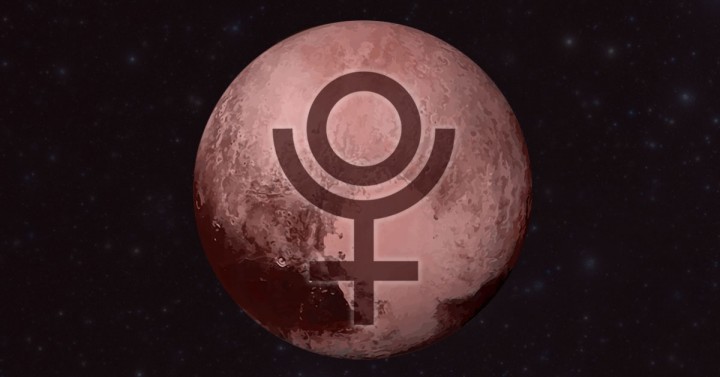 Pluto is associated with transformation, sex, death and rebirth, and truth-seeking. It also has archetypal resonance with transpersonal power, oligarchy, secret societies, and great wealth.

By itself, Pluto operates slowly and relentlessly. Astrologer Rick Levine memorably described it as “a tsunami moving at the speed of a glacier.” Pluto metaphors include a phoenix burning to ash and resurrecting, a snake shedding its skin, and a caterpillar morphing into a beautiful butterfly.

Pluto entered Capricorn in 2008, when we nearly had that global financial meltdown. It will stay in Capricorn through 2024.

Pluto’s prior stint in Capricorn, 1762 through 1778,coincided with the American Revolution and the Declaration of Independence. This time also marked James Watt’s perfection of the steam engine, and the explosive acceleration of the Industrial Revolution that Watt’s refinements made possible.

These events clearly illustrate a basic Pluto in Capricorn theme: the destruction of old structures which have outlived their usefulness, and the birth of new ones whose time has come.

In our current Pluto in Capricorn era, we are once again witnessing revolutionary changes to the existing world order. I mentioned several examples at the beginning of this article.

More instances of challenging Pluto in Capricorn manifestations are “Big Brother” style surveillance, widening government control, and increasing invasion of privacy. But, in the US, we’ve also seen healthcare, financial and energy reform – at least to the extent that a bitterly divided Congress would allow it.

The Uranus-Pluto Square in Detail

The seven squares between Uranus and Pluto, although exact 2012 through 2015, are strong 2008 through 2018. This is the most volatile astrology since the 1960s. We can expect this era to be marked by upheaval, revolution and rebellion, intensified artistic and intellectual creativity, rapid technological advance, and inspired innovation.

The prior Uranus-Pluto square occurred from the late 1920s through most of the 1930s. This era, the Great Depression, has obvious resonance with the huge economic challenges being faced around the world today. The stock market may be hitting record highs, but very little of this corporate prosperity is trickling down to the middle and lower classes.

Uranus and Pluto, like all planetary pairs, run in synodic cycles. This cycle begins with the conjunction of two planets, and ends when they reach conjunction again.

A synodic cycle can be divided into four major parts. These correlate to the major phases of the Moon: New, First (Waxing) Quarter, Full, and Third (Waning) Quarter. These relate to four potentially challenging astrological aspects: conjunction, waxing square, opposition and waning square.

Uranus and Pluto take over 100 years to complete the four phases of their synodic cycle. Their most recent “New” phase occurred when they were conjunct during the 60s. This volatile decade could not have been more different than the conformist 50s that preceded them!

In the US, we had civil rights demonstrations, the feminist movement and anti-war demonstrations. Thirty-two African countries gained independence, China was squeezed by the iron grip of the Cultural Revolution, and Eastern European countries demonstrated against communism. Arab-Israeli conflicts grabbed the headlines, and the world barely averted nuclear disaster during the Cuban Missile Crisis.

Many felt disappointed that many of the ideals of the 60s were seemingly drowned out by the hyped-up, disco-driven “Me Decade” of the 70s. But this is how synodic cycles work. Themes which initiate during a conjunction (New Moon) phase continue developing, often behind the scenes, then burst back into prominence during the waxing square (First Quarter).

Few imagined during the 60s that GLBTs, Hispanics, blacks, immigrants, non-Christians and other minorities would rise to hold as many positions of power as they do today. Environmentalism, the increasing acceptance of gay marriage, and the gradual progress toward legalized marijuana can also be seen as current outgrowths of 60s idealism.

The 60s was marked by breakthroughs that were truly revolutionary for their time. Highlights include the Moon landing, the pill, satellites, video games, computers, cassette tapes, ATMs and lasers.

We are also experiencing extraordinary breakthroughs in this decade. Cloud computing, smart phones, tablet computers, 3D printers, social networking and other innovations are rapidly and radically reshaping our lives. Most of us may not even be able to imagine the technologies that will be transforming our lives by decade’s end.

The downside of all this technology can be artificiality and isolation. A Facebook “friend” whom you have never met can be a poor substitute for someone you can embrace in person!

The most important paradigm shift now emerging under the Uranus-Pluto square is an awakening of unity consciousness. A universal spirituality, unrestricted by sect or dogma, is arising.

More holistic and inclusive perspectives are coming into prominence. Their rise is not based on abstract ideas, but on more and more people having direct experience of their own divine nature. More people are realizing, as Eckhart Tolle teaches so beautifully in A New Earth, that the taming of the ego is an indispensable step in achieving global harmony.

Unity consciousness is more commonly associated with Neptune and Pisces, which rule the dissolution of boundaries. But Uranus rules quantum leaps and sudden breakthroughs, which is how spiritual awakening is commonly experienced. And Pluto destroys that which no longer serves us, including false identification with the ego.

Read my short article on how to make the best use of the Uranus-Pluto square in your life.

Revised 5/26/13. Originally published in the 1/16/12 newsletter. Many thanks to my friend and fellow astrologer Eric Meyers, for allowing me to include some of his ideas from our “Big Change Now!” presentation into this article.

I offer the soul-level insights of astrology, the healing power of shamanism, and the life-transforming support of life coaching. My podcast won a Top 10 Astrology Podcast Award, and I was a Best Astrologer winner three years running. After 9000+ sessions, I can help you master challenge, embrace transformation, and enjoy a more wonderful life! Click for more detailed bio.

Get Benjamin’s forecast & more in our email newsletter. Subscribe for a chance to win a free astrology consultation!

This site uses Akismet to reduce spam. Learn how your comment data is processed.

Learn how to make the best use of the current planetary energies -- for free!

Make the This Week in Astrology podcast a regular part of your astrological education.

You can make a one-time or monthly donation with PayPal or debit/credit card. Thank you!

Free Invocation MasterclassWho knew healing and spiritual awakening could be so easy?

Please accept my free gift: the Invocation Masterclass! 6 quick, easy lessons, focused on spiritual awakening and self-healing, will help you …